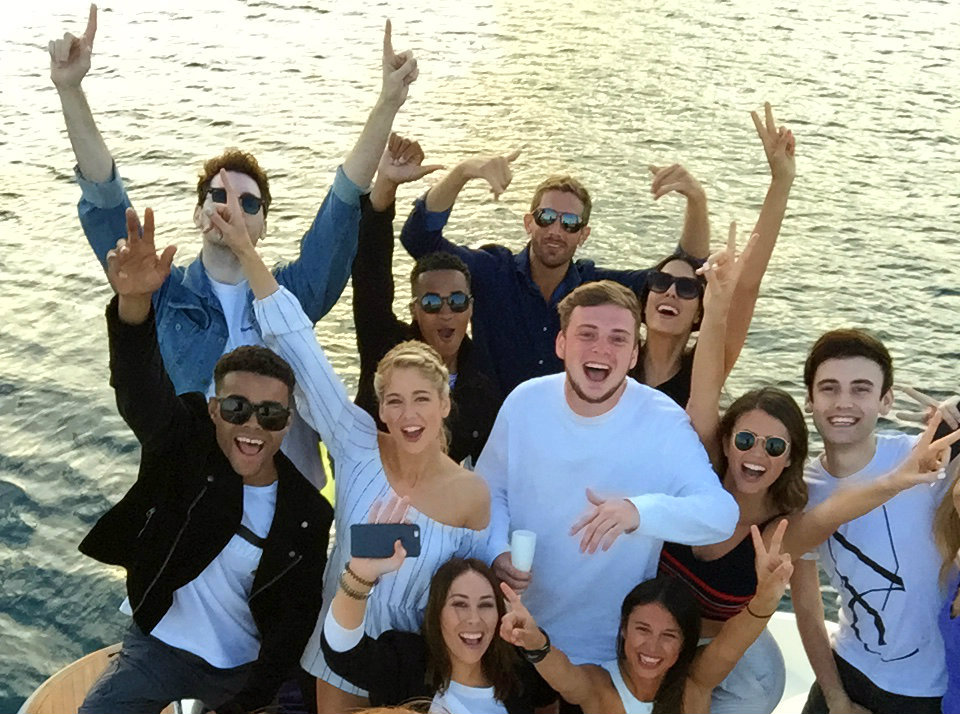 The hardworking cast of top UK soap Hollyoaks took a break from filming recently to join your very own Boats Ibiza crew for a whizz around Ibiza in our sleek 47’ Sunseeker Camargue.

Hollyoaks was first broadcast on Channel 4 was way back on 23 October 1995. In the 22 years since it first appeared, the much-loved show has earned a reputation for tackling some tough subjects and has won many prestigious T.V. industry awards. We were very proud to welcome them onboard!

Visiting the island for some (top secret) filming with the Channel 4 TV crew, we all met up at Rita’s cantina in the Port of San Antonio on a typically beautiful Ibiza evening. With the sun still warm, a few fluffy scattered clouds around and a cool breeze in the air, it was a perfect evening for a relaxed champagne sunset. After a brief safety speech from Captain Chris, we gleefully cracked open the Veuve and off we sailed into that beautiful Balearic sea. The tunes were chilled and the smiles were massive, as we cruised around Cala Gracio, Gracioneta & Cala Salada, reaching the beautiful flat rocks of Punta Galera before turning back towards sunset strip.

The guys decided to take their sunset vibes in, anchored in front of Cafe Mambo & Cafe del Mar. It’s quite a sight, from that vantage point, to see the thousands of people crowded on the shore, gazing mesmerised at that famous sunset slipping below the horizon and hear the rapturous applause that follows.

The Camargue’s sound system pumped out classic Balearic sunset beats and the happy Hollyoaks cast took the opportunity to completely relax and unwind, chatting, laughing and dancing beneath the setting sun. Happily posing for photos, the trip seemed to be over in the blink of an eye and before we knew it, we were heading back into the port of San Antonio, wishing we could do it all over again.

A massive thank you to the Hollyoaks cast for being such a cool bunch, for the generous invite to join you all at Pacha that night and most of all, for choosing Boats Ibiza. Until next time, guys, high-five! 🙂 Don’t want to miss anything Boats Ibiza? Sign up for our newsletter!